Create an Account - Increase your productivity, customize your experience, and engage in information you care about.

It has been a bizarre week with weather conditions and City closures. Here are the highlights for the week.

City Management has received the preliminary ‘Nine-Year Capital Plans’ that Mayor Payton has requested. We will be reviewing and finalizing the comprehensive ‘Nine-Year’ plans for City Council review. We anticipate having a final plan by April.

The Airport received 7.9 inches of snow on Tuesday night and Wednesday. Airport personnel worked up to 36 hours straight clearing wet and heavy snow. All Air Carrier flights were canceled on Wednesday, and the airport opened late Wednesday afternoon. Maintenance applied approximately 4,000 gallons of deicing fluid during this event.

On Thursday the contractor working on the new parking lots hit an unmarked water line causing the airport water tower to empty. The terminal building was without water for approximately six hours. There is currently a boil order for the Airport area, and hand sanitizer has been placed in all the restrooms. A plan is in place to flush all the lines in the terminal once the lab results clear the boil order.

Midland County Fresh water Supply District 1 had a quarterly meeting on 2/6/2020. The generator project that was approved by the City is on schedule to be complete mid-spring, the board elected all current officers back into their current seats, and the yearly audit was approved.

We issued 103 Single Family permits in January. This number represents more than we issued in the banner year of 2018 in January.

We completed final inspection of 40 new homes in January. This represents about the same level finished in January 2018.

The major events for media this week were the MPD officer that was shot early Thursday morning during a disturbance call and on Friday for the fatal hit and run accident that occurred.

Solid Waste was chosen as the “Department of the Month” for February. We are working with Jeffery Ahrlett, Director of Solid Waste, to plan a video schedule.

· Year 2- Carter Ave Water and Paving- Waterline work is complete. Base and paving is being held up by Franchise Utilities.

The Signals crew worked on various trouble calls, as well as radio and luminaire issues. They worked with TxDOT and Willis on Big Spring HSIP Project.

The East Side Street and Alley crew filled 250 potholes and prepped for concrete construction underneath parking awning.

The Drainage and Vegetation completed two sweeping requests. The crew removed vegetation and treated areas with herbicide as needed. They removed six yards of debris from the Mulberry Channel and mowed along Avalon Dr. from Briarwood Ave. to Mockingbird Ln.

FY 2019 Hot-In-Place Recycling (HIPR) Project/Mill and Inlay – The contractor is currently completing Mill and Inlay at an area near Hill Park, but has experienced some recent delays due to rain and temperatures not suitable for asphalt paving. The project is approximately 90% complete. 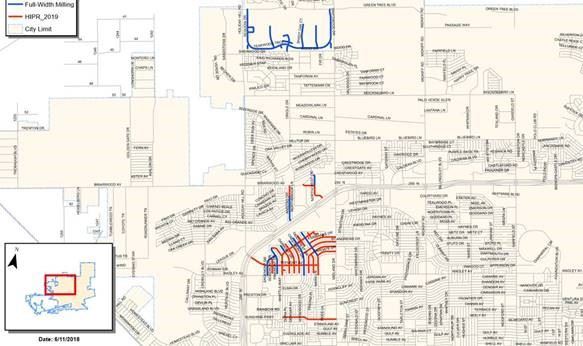